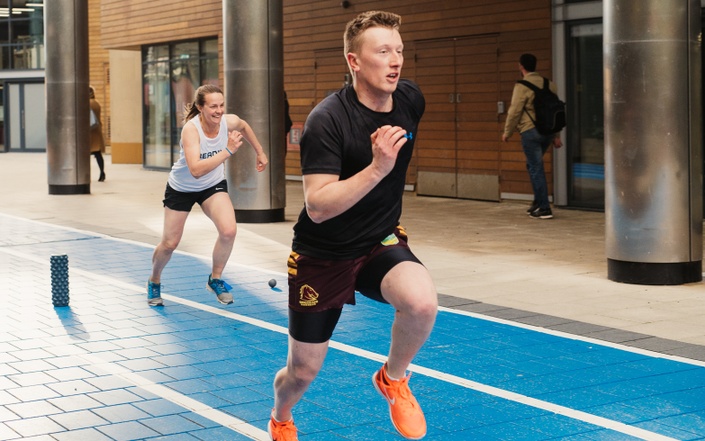 Learn the most effective way to increase straight line speed from the very best in the business
or subscribe and access ALL courses for £25/month!

“Move Fast. Speed is one of your main advantages over EVERY competitor”

In any sporting environment, being faster is always an advantage.

If the fastest person on a rugby field breaks the defensive line, they are going to put their team in a better position (by either scoring or taking their team closer to the try line) than the slowest person on the field would.

In cricket, the faster you are the more runs you can score when batting and the less runs you can give away to the other team when fielding.

Often, being faster can trump skill. If a faster footballer kicks the ball past the defenders and then beats them to the ball, it doesn’t matter how good those defenders are at tackling, the faster player will still be one on one with the goalie.

The faster you are, the more efficient you are at every speed less than your top speed.

This means that the faster you are, the better your endurance is.

Having more endurance as well as being faster than your opponent gives you such an advantage in every sport it’s almost unfair.

Inside Speed For Sport

Speed is split into two categories; Acceleration and Top Speed.

When does the course start and finish?

The course starts now and never ends! It is a completely self-paced online course - you decide when you start and when you finish.

How long do I have access to the course?

How does lifetime access sound? After enrolling, you have unlimited access to this course for as long as you like - across any and all devices you own.

What if I am unhappy with the course?

We would never want you to be unhappy! If you are unsatisfied with your purchase, contact us in the first 30 days and we will give you a full refund.